When I was a kid, one of my favorite snacks was cinnamon graham crackers and peanut butter. sandwiches. They were quick, cheap and easy so my Mom liked them and I loved how the flavors meshed together.

These days, I still turn to that old favorite when I need a quick and easy snack. The difference between my Mom and I though is that growing up they always came in a blue box. As an adult though, we use my homemade graham crackers instead.

Why Make Graham Crackers at Home?

.Making graham crackers are home is great for a lot of reasons. Not only are they cheaper, but they’re also much healthier since they’re made only with ingredients you are aware of. This means less preservatives and other ingredients you may not want your family eating.

You can also customize your graham cracker recipe when you make them at home. You can add chocolate to the recipe, extra vanilla extract and so on. This means you can really get a flavor that your family loves!

What Ingredients are Graham Crackers Made From?

As I said, not only are homemade graham crackers cheaper than store bought, they’re also far healthier. Because they’re made only with ingredients that you know are great, you’ll find that they typically have more vitamins and fiber in them than store bought ones that typically have to have things such as potassium and calcium added back in due to the preparation process.

Plus, our recipe for graham crackers does not use any sugar and instead, uses honey to sweeten them.

You may think you’ll miss the sugar. You won’t. Trust me.

If you’re a bit unsure about learning how to cook from scratch, don’t be. You can learn how to make homemade graham crackers quite easily.

Actually, they’re pretty foolproof if you ask me.

Healthy is a relative term, but yes, in general, graham crackers are a healthy choice. At least they’re a healthier choice for a snack than cookies, chips or other snacks that are laden with high carbohydrates and calories.

Because they use a flour mixture of whole wheat flour and all-purpose flour and honey to replace sugar, they won’t do nearly as much damage as other versions.

What Can I Use Homemade Graham Crackers for?

They’re great for snacking; like with my peanut butter and graham cracker sandwiches. Pair them with chocolate and marshmallows – bonus points if you use homemade marshmallows – make amazing smores for summer camping and for holiday baking, they really can’t be beat in flavor.

How to Keep Graham Crackers from Getting Stale

Once you make a batch of these homemade graham crackers, you’ll see that they won’t hang around your kitchen long enough to get stale, however, if you’re like me and like to do really big batches at once, it might be a concern.

You can keep them from going stale one of three ways. The first two involve freezing and will just depend on how much work you want to put in at first. The second is shelf stable with a little boost to help keep your crackers from going stale.

How to Freeze Graham Cracker Dough

The first method to keeping graham crackers from going stale is to freeze the dough until you’re ready to bake it. This means you will follow the graham cracker recipe below only until you get to the step where you roll the sheet of dough out.

Instead of rolling and scoring the crackers, roll the dough into a ball, cover twice with plastic wrap then freeze the dough ball in a freezer bag. Be sure to squeeze as much excess air from the freezer bag as possible.

When you need or want to finish the crackers, thaw the dough a bit and continue with the recipe.

The other method of freezing graham crackers is to follow the recipe completely and freeze the graham crackers themselves once they have fully cooled. Freeze them flat on a baking sheet or silicone mat and store in a hard sided food storage container or freezer bag with sheets of parchment paper in between each cracker to keep them from sticking together. This method works best if you are not worried about them getting crushed such as when you’re using them in a graham cracker crust.

Finally, if you want to store your graham crackers on the counter, be sure to allow them to cool on a wire rack completely after baking. Place the crackers in an airtight food storage container to store them.

If you have a batch larger than will be eaten in a few days, it can be helpful to add an oxygen absorber or dessicant packet to the container to keep them fresh and moisture free for longer.

How to Make Cinnamon Sugar Graham Crackers at Home

This particular graham cracker recipe does not have a cinnamon sugar topping, however, it is not hard to add one if you desire. To do so, melt 1-2 tablespoons butter and use a pastry brush to coat the tops of each cracker.

While the melted butter is still wet, sprinkle a cinnamon/sugar mix on top. and allow to cool completely before using.

How to Make a Homemade Graham Cracker Crust? 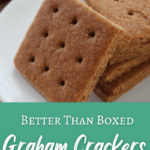 How to Make Cinnamon Sugar Graham Crackers at Home

This particular graham cracker recipe does not have a cinnamon sugar topping, however, it is not hard to add one if you desire.To do so, melt 1-2 tablespoons butter. Then, using a pastry brush, brush the tops of the hot crackers with the melted butter. While the melted butter is still wet, sprinkle a cinnamon/sugar mix on top.Allow to cool completely before using.