Scare up some Halloween fun with this super simple DIY Halloween Costume idea! This DIY zombie makeup tutorial will show you how to transform anyone into a zombie in minutes!

With Halloween right around the corner, spooky adventures and treats will soon be on the agenda. If you’re trying to do Halloween on a budget this year, you may be looking for costume ideas that you can do yourself without spending a ton of cash.

This DIY zombie makeup tutorial is perfect for anyone looking to have a great Halloween costume on a budget! In fact, you very likely have everything you need to create it, in your bathroom right now.

What Supplies Does This Zombie Makeup Tutorial Use?

Believe it or not, this DIY zombie makeup uses regular makeup, toilet paper and school glue. That’s it! That’s what makes it so great for those who don’t have a lot of money to spend.

If you want to add blood to your zombie – and what is a zombie without blood – you can either buy Halloween blood or you can make THIS DIY costume blood recipe. It’s non-toxic and made with food products so you know it’s 100% safe.

How Long Does This Zombie Makeup Last?

While I’m not sure exactly how long it will last, I can tell you that my own daughter has worn this makeup for at least eight hours. It will depend on a few factors including the quality of the makeup you use and how often you touch your face.

Whether your zombie makeup lasts two hours or ten, you’ll be glad you followed this tutorial. I have tried to make it as simple as possible to follow since I don’t have pics.

At the end of the “recipe card” below, I have included two final photos. These are both my daughter – although several years apart – using the same tutorial.

If you have trouble following along with my written tutorial, HERE is a great zombie makeup video tutorial although the method is much different than the one I am sharing here. 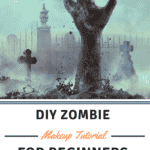