You are here: Home » Food & Drink » Corn Cob Jelly Recipe – Simple Small Batch Canning Recipes
This post may contain affiliate or referral links that help keep this site running. For more information about this, please see our disclosure policy.As an associate of Amazon and other websites, I may earn a small commission whenever you click through a link from this site. This commission helps to support this site and keep it running.

If you’ve been a Six Dollar Family reader for any length of time, you’ll probably have already figured out that I hate waste; especially food waste. We are such as wasteful society that I feel like we would all have lives with a much higher quality of life and more money in our pocket if we stopped wasting so much. Honestly though, it isn’t entirely our fault. We’re taught from a young age to replace something with new when the other gets even mildly used, expiration dates make it hard to know when something truly expires unless you’ve taken the time to learn how to read expiration dates more clearly and more. It was that hatred for throwing something out that I can make something new or yummy with that drove me to make this corn cob jelly recipe originally. Over time, it has not only become a great way to reduce waste at home, but it has also become one of my favorite small batch canning recipes because it’s so simple! 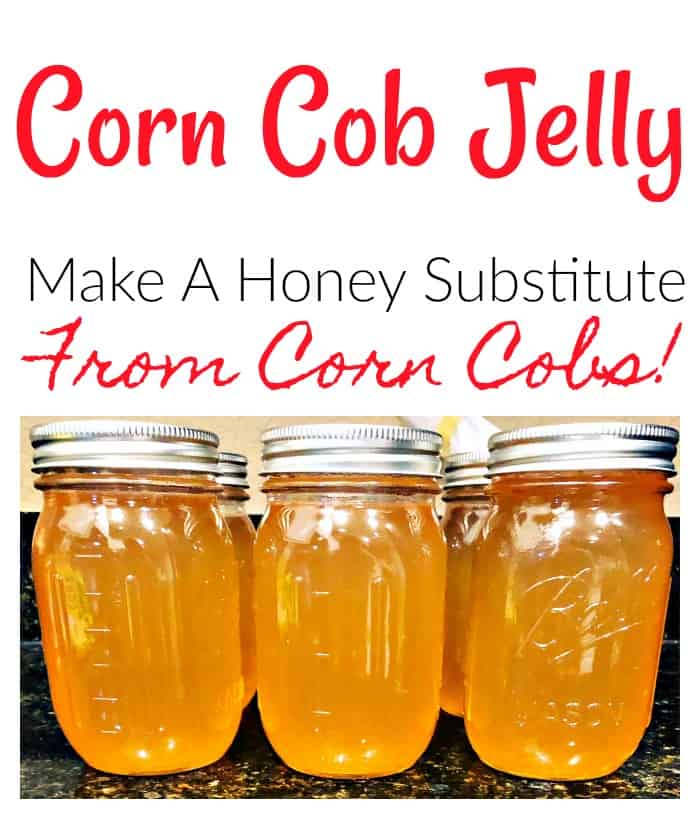 It may seem odd to you to make a jelly out of corn cob scraps, but why should it? After all, there are several products we use each day that are made from scraps. Apple cider vinegar uses apple scraps and you can even make an apple scrap jelly with scraps! Potatoes are usually grown from the scraps of another potato. In fact, there are quite a few different vegetables you can grow from scraps. Lard is made from the scraps of fat on a piece of beef or pork. Even certain plants such as Elderberry or Aloe can be re-grown from a scrap piece of itself. It isn’t as uncommon as you may think although I totally understand that it may seem that way.

My family is well aware that Mom likes to save and re-use anything she can so it really wasn’t surprising when I stuck a bunch of corn cobs in the freezer after I found a great deal at the store and taught Steve how to freeze corn for long term storage a few weeks ago. As I said, I seriously hate waste so over time, I’ve learned how to find new uses for old towels, new ways to use Fels-Naptha, new uses for fabric softener, new ways to use empty milk jugs, new uses for newspaper, ways to use old sheets, uses for empty bottles, ways to use WD-40, uses for Dawn besides dishes and many, many more that I’m certain I’m forgetting. They weren’t necessarily surprised, but I don’t think they fully bought into how amazing this corn cob jelly recipe really was! Steve had made the comment though that I was teaching him slowly how to reuse things to save money so he was more than willing to give things a try. Guess what? They all love how this corn cob jelly recipe tastes! Even Laura who is firmly against honey likes it!

The reason I mention honey is because that is what this corn cob jelly recipe tastes like; a less sweet version of honey. Simple it is one of my favorite small batch canning recipes, I can make it up anytime I have enough corn cobs in the freezer and have that honey flavor even if I don’t happen to have any honey on hand. It’s rare for that to happen, but it does happen occasionally. You can use your corn cob jelly the same way as honey too. It is fantastic on toast, pancakes, ice cream or any place else that you use honey. My favorite canning recipe is my orange marmalade recipe, but this one comes in a close second! If you are new to small batch canning recipes, I would highly suggest you check out THESE canning safety tips before you get started. 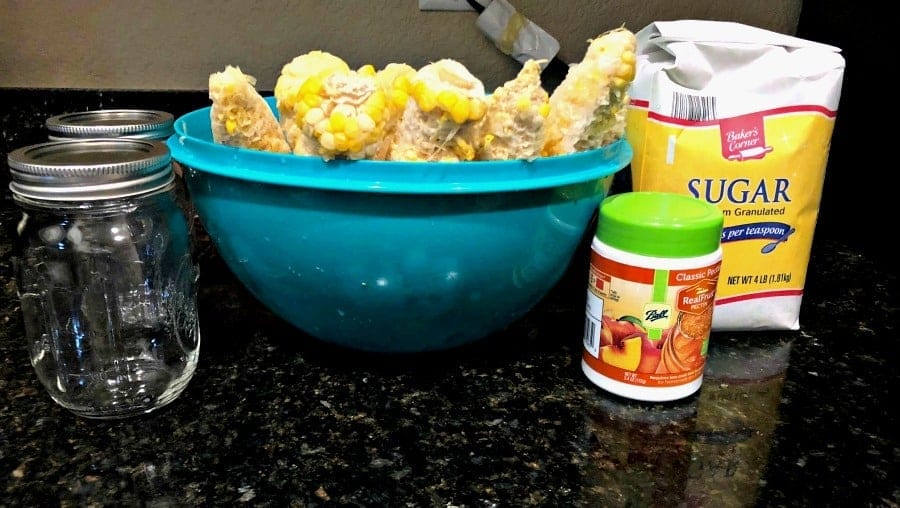 You Will Need: This recipe makes 2-3 pint jars.

As I mentioned above, this recipe makes 2-3 pint sized jars. You can get 6-7 pint sized jars from one batch of the water. I work in batches of two when I make my own corn cob jelly. If you were doing that, you would make it as instructed for the first batch. The second and third batches, you would skip boiling the corn cobs and jump right to the section with the corn water.

If you don’t have enough corn cobs to make a batch at once, that’s okay. You can freeze them in a freezer bag until you do. We rarely have 10-12 at one time since we’re only a family of 4, but they freeze extremely well with no special care needed. 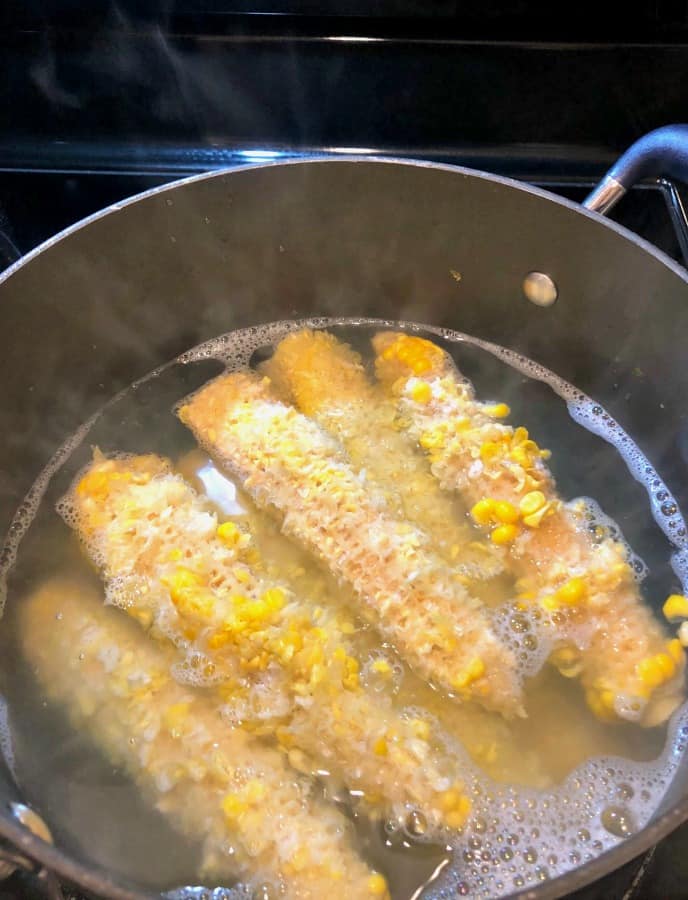 To start, add the 12 cups of water and your corn cobs to a large stockpot and bring to a boil. No, you don’t have to scrape every bit of corn off your corn cobs. They will fall off as they cook and you can strain them off later on. Ours had quite a bit of corn left on them from where I was trying to teach Steve and the girls how to remove it for the freezer but that’s okay.

Bring the corn cobs to a heavy boil and allow them to boil for 20-25 minutes. 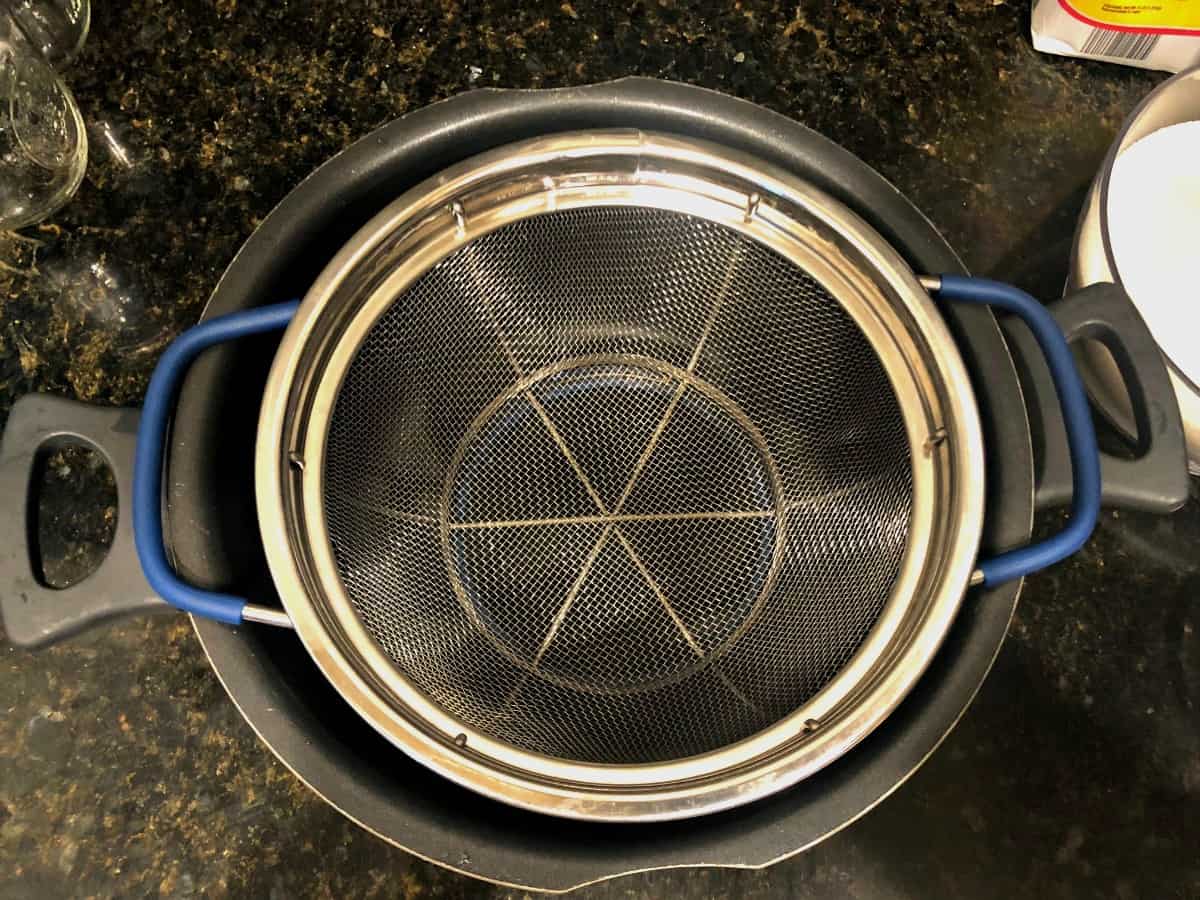 While your corn cobs are boiling, go ahead and set up a fine mesh strainer over another deep stockpot or a large mixing  bowl. You’ll be pouring your water through it, so you want to make sure that you use something deep enough to hold 12 cups and able to hold the water you’ll need.

Like my old pots? These are my canning pots that I’ve had for years. Goodwill finds from when I first started learning how to can. I love those things and they’ve brought me many tasty goodies even with their scratches and other blemishes. 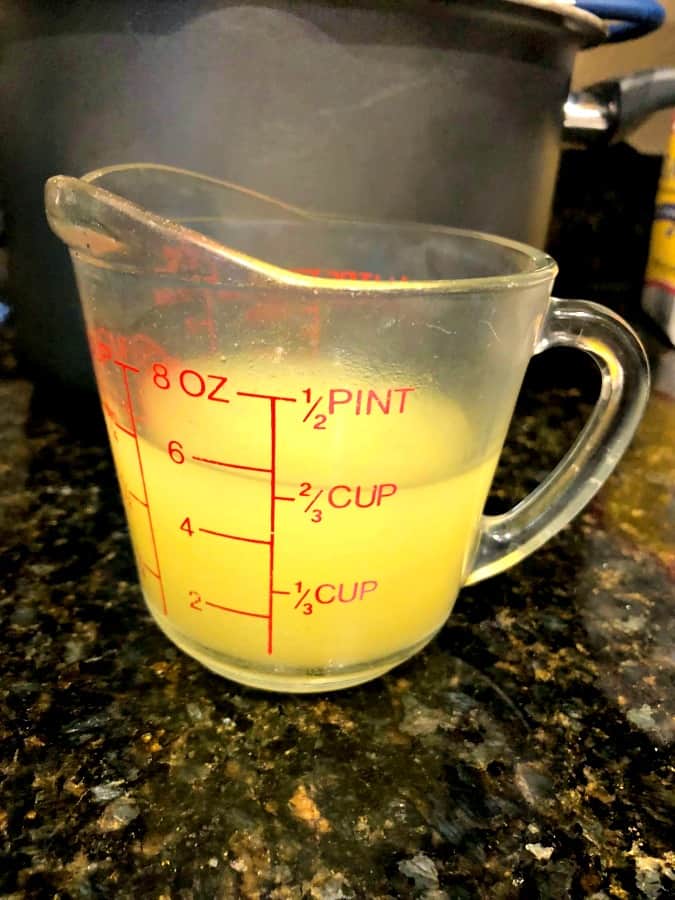 Anyway, back to the corn cob jelly recipe – sorry, I like my pots so much that I ran around chasing a rabbit for a moment – after the water and cobs boil, you will end up with a yellow corn water like you see in the photo above. This is the basis of your corn cob jelly. 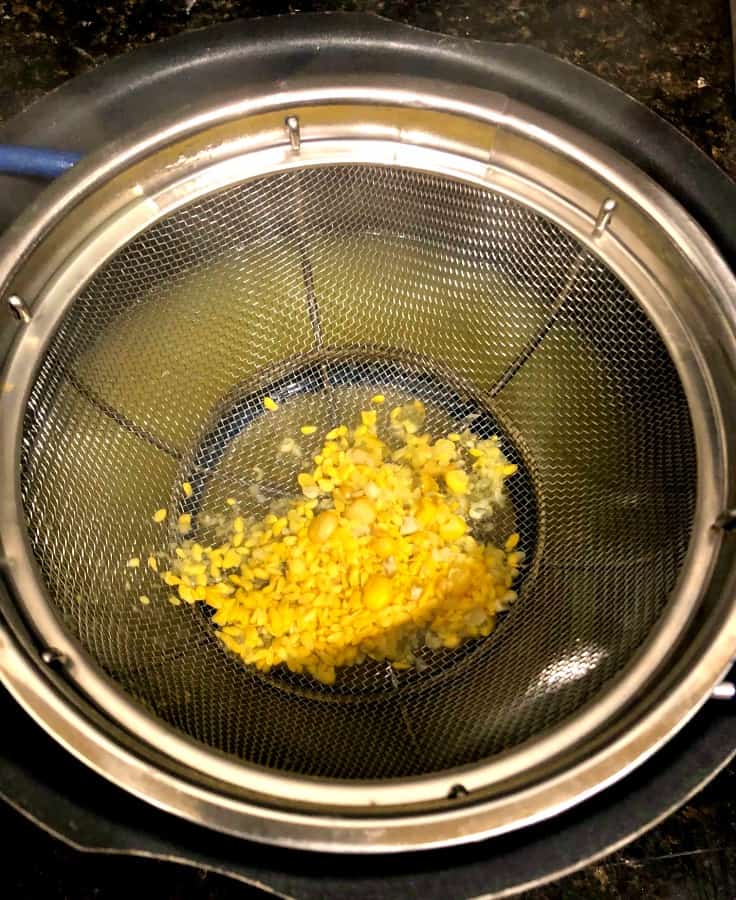 Run all 12 cups of the corn water through your fine mesh strainer. This is why I said it doesn’t matter if there are corn bits on the cobs. They will come off. We like our corn cob jelly to be smooth, but if you would prefer, you can leave the corn bits in the jelly. It won’t matter much either way. 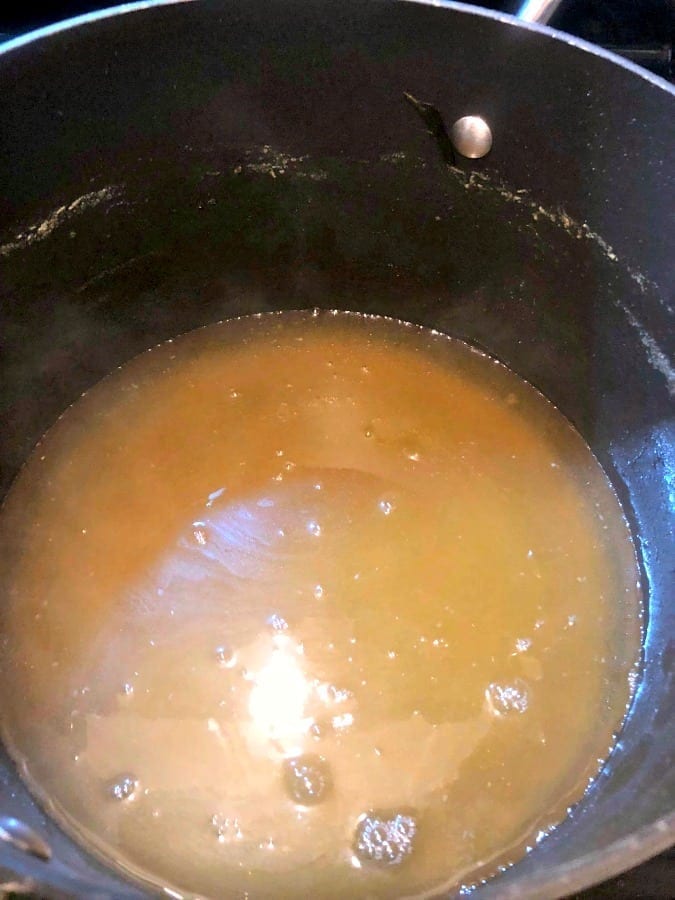 After you have strained off the water, measure out 4 cups of corn water and add it back to the pot while putting it back on medium heat. If your corn cobs had any silk or anything left on them (mine apparently did), they should have stuck to the side of the pan to make it easy to remove them. That is what the black piece of gunk you see in the photo is. Simply remove it if it bothers you.

A word on the pectin – If you’re not familiar, pectin is a naturally occurring substance in some fruits that acts as a thickener in some canning recipes. Apples are very high in natural pectin, but corn cobs are not. This means we have to add pectin if you want your corn cob jelly to thicken. The reason I listed the amount of pectin at 6-8 tablespoons is because you control how thick you want your corn cob jelly to be. We prefer ours to be more of a syrup consistency so I only use 6 tablespoons when I make ours. If you prefer it to be thicker and more like an actual jelly, use 7 or 8 tablespoons. 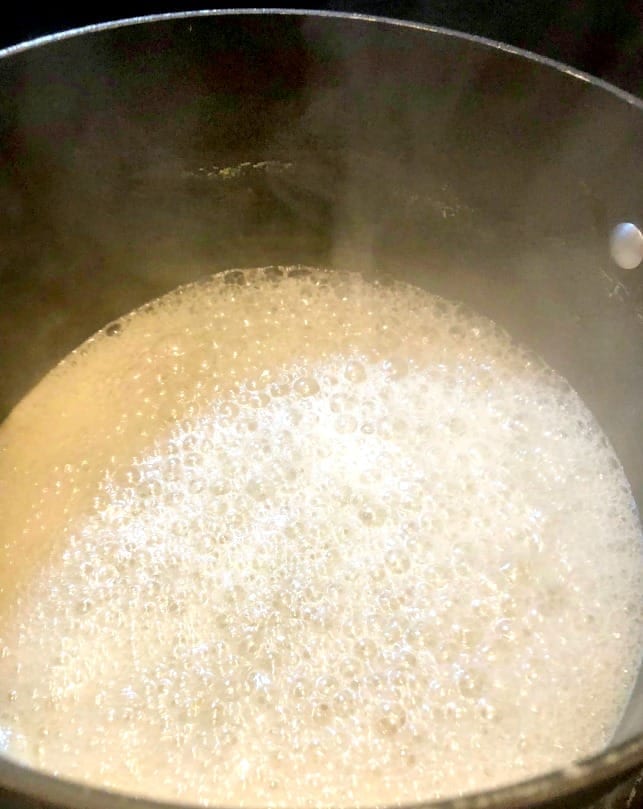 Now that we have that out of the way, add the pectin and the sugar all at once to the pot and using a wooden spoon,  stir it well until the pectin and the sugar are both dissolved completely. Once it’s dissolved, bring it to a gentle, but rolling boil. Be careful though since it can (and will as my daughter found out) boil over. Lower your heat if necessary to keep it from scorching or boiling over. 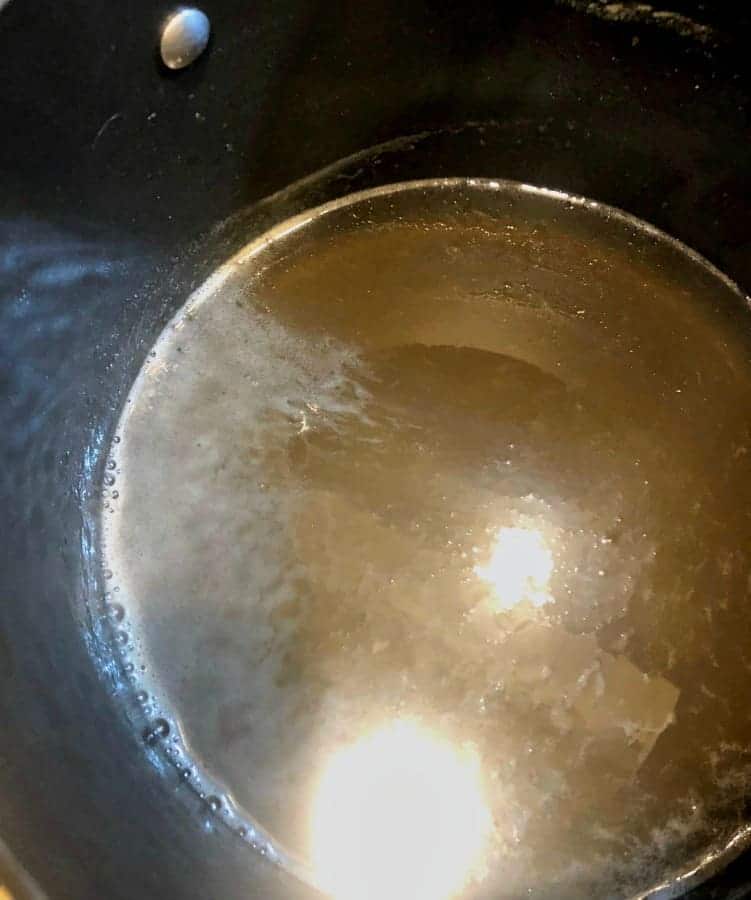 Boil the corn water/pectin/sugar mixture gently for approximately 10 minutes then remove from the heat. After it has settled down a bit, skim off the white foam that has formed on the top. If you can’t get it all, that’s fine. 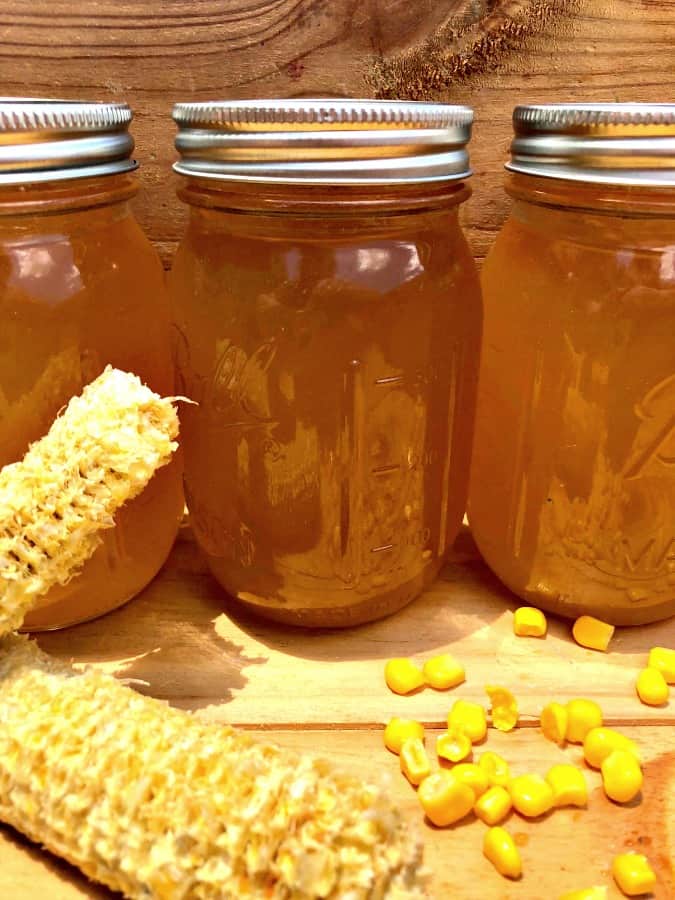 Ladle your corn cob jelly into pint sized jars  leaving 1″ head space and process in a water bath canner for 6 minutes. Remove from the canner, set aside and listen for your jars to seal. Refrigerate any jars that do not seal and either reprocess or use within 3 weeks.

If you are processing more batches with corn water from the original 12-cups, measure out 4 cups of corn water and start from there.

Finally, those corn cobs you used to make your corn cob jelly? Either discard them after boiling or dry them out to make corn cob fire starters for your next camping trip!

Join over 9,000 others who have already started building their six figure lives! Each week you will receive our very best recipes, practical DIY projects, garden and homestead projects and of course, frugal living tips!

Previous Post: « How to Save Money on Christmas by Having a Free Christmas
Next Post: 14 Reasons Your Household Budget is Failing {and How to Make Your Money Work for You} »