Fall is one of my favorite seasons for more than just cooler Texas temperatures. I absolutely adore pumpkin spice recipes! The flavor is very calming and soothing to me which makes it the perfect treat in my opinion. It just doesn’t feel like September or October without my favorite pumpkin recipes.

These recipe for pumpkin spice whoopie pies is one of my favorite fall recipes hands down. It is second only to my pumpkin roll with cream cheese filling.

What is a Whoopie Pie?

A whoopie pie is a combo of a cake and a sandwich cookie with a really tasty filling in between. In these pumpkin whoopie pies specifically, the moist cake layer is where the pumpkin spice flavor is held in this particular recipe with the whoopie pie filling creating a layer very reminiscent of the cream cheese filling found in a pumpkin roll.

In other words, fans of both cake or cookies will both enjoy whoopie pies.

What State Do Whoopie Pies Come From?

Believe it or not, whoopie pies were an Pennsylvania Amish recipe originally. The Amish are very much a society that believes in reducing waste as much as possible. So to avoid waste, Amish women would drop cake batter onto prepared baking sheets and bake it.

Once it was baked, they would then top it with another frosting mound and add a yummy frosting in between. From there, the dessert spread to New England and other states!

How to Get Free Amazon Prime

If you are shopping online, you’ll want to do everything you can to save money. For Amazon, this means making sure you are an Amazon Prime member. There are quite a few Amazon Prime benefits but the biggest one for shopping is the free 2-day shipping. In addition to FREE Prime shipping, you’ll also score exclusive coupons, early access to deals, free TV with Prime video and more! If you’re not currently a member, you can grab 30-days of Amazon Prime totally free.

Click Here to Get 30 Days of Amazon Prime Free

Whoopie pies are best stored wrapped individually in plastic wrap and kept in an airtight food storage container. The plastic wrap keeps the filling from becoming a mess.

If possible, store them in a single layer, however, you can stagger them in the container if necessary. They can weigh quite a bit for a cake or cookie which means you won’ t want them directly on top of each other. Doing so could result in the cake on the bottom being crushed.

Should Whoopie Pies Be Refrigerated?

If your whoopie pie recipes or filling recipe calls for butter, buttermilk, cream cheese or any other ingredient we normally refrigerate, you will want to store in the fridge.

However, if your filling mixture does not have any ingredients like that, they can tolerate being held at room temperature for a few days. Marshmallow fluff is not one of the ingredients that needs to be kept in the refrigerator even though it may seem as if it should be.

I Have a Free Gift For You

Join thousands of others who have already started building their six figure lives! Whether you’re just starting out with only”six dollars” or you’ve already reached six figures, this FREE guide is sure to help you reduce your expenses even more! When you subscribe to Six Dollar Family emails, you will automatically receive a FREE copy of my eBook, “The Ultimate Guide to Cutting Your Household Expenses in Half.” This book is packed full of ways to help you lower your cost of living in every area of your life and home!

Yes! Give me my free EBook!

Can I Freeze Whoopie Pies?

Yes! Whoopie pies freeze incredibly well! To freeze whoopie pies, follow the recipe as stated and ensure they are fully cooled. Once cooled, wrap individually and freeze in a single layer. Once frozen, store in a solid airtight storage container.

How Long Do Whoopie Pies Last in the Freezer?

Technically, whoopie pies will last around ninety days in the freezer, however, it is best to eat them within the first thirty days. After that they will start to lose flavor.

To thaw, remove them from the freezer and remove the individual pies from the storage container. Thaw them in the fridge on a wire rack or shelf. Do not try to keep them in the container as they may thaw soggy due to condensation. 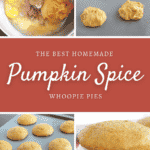 For the Whoopie Pies:

Nutrition information is auto calculated and may not be 100% accurate. Please use your best judgement.